In early April, as the European-Japanese BepiColombo spacecraft was approaching our home planet ahead of the first flyby in its seven-year journey to Mercury, mission scientists invited amateur astronomers to observe the event from Earth and share their photos of this unique event. The authors of the three best images of the flyby – the best glimpse, the best track and the last glimpse – selected by the jury will receive a scale model of BepiColombo.

Over thirty observers from around the world participated in the campaign. The jury, composed of BepiColombo mission experts, was very positively impressed by all entries, both on aesthetical grounds and because of the good quality of the astronomical observations, and wishes to thank all participants who observed the Mercury explorer as it crossed our sky and immortalized it in their beautiful images and sequences.

The winning photos are:

BepiColombo reached its closest approach to Earth at 04:24:57 UTC on 10 April, flying only 12 689 km above our planet’s surface. The manoeuvre – the first of nine planetary flyby and the only one of Earth – tightened the spacecraft’s orbit towards the inner Solar System, where it is scheduled to meet Venus on 15 October for the first of two flybys of this planet on the way to Mercury.

The last glimpse of BepiColombo

This image shows a parting view of the ESA/JAXA BepiColombo spacecraft, taken from Japan more than a week after the mission performed its Earth on 10 April 2020. The spacecraft is visible as a dot (circled) against the tracks of distant stars.

Captured between 12:43:19 and 13:18:23 UTC on 19 April from the Rikubetsu Space and Science Museum observatory in Ashoro District, Hokkaido, Japan, the image was selected as the ‘last glimpse’ of the BepiColombo flyby as part of a photographic contest aimed at amateur astronomers.

The jury appreciated that the observers tried until the very end, nine days after closest approach, and succeed in obtaining an appealing image – even in colour – of the spacecraft as it departed from our planet.

This image shows the ESA/JAXA BepiColombo spacecraft moving across the sky as viewed from Brazil during its Earth flyby on 10 April 2020. The moving spacecraft is visible as a series of four diagonal lines crossing the frame from top left to bottom right against a field of stars featuring a beautiful deep sky object, the reflection nebula known as Blue Horsehead Nebula, or IC 4592.

The flyby was captured by Sergio Silva from Porto Feliz, São Paulo, Brazil, at 04:39:58 UTC on 10 April. The flyby observation comprises four 15-second exposures as part of a 3-hour long exposure to image the nebula.

The jury appreciated the choice to combine the flyby, not far from Earth, and a distant nebula, observing the event against a deep sky object, as well as the fine quality of the image and processing.

The image was obtained using a Celestron C11 Edge HD telescope with a Hyperstar lens, a iOptron CEM60 mount and a ZWO ASI071MC-Pro camera.

A tale of two spacecraft: BepiColombo and the INSAT 2D satellite 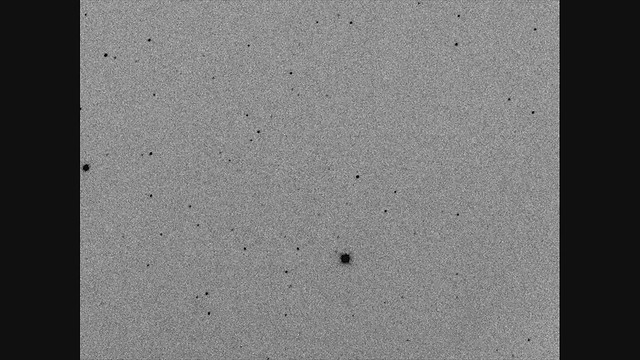 This sequence of images shows the ESA/JAXA BepiColombo spacecraft during its Earth flyby on 10 April 2020, crossing the sky as viewed from the UK. The spacecraft is visible as a moving dot in the frame of stars, making its way from the lower right towards the upper left; halfway through the observations, another satellite also made an appearance, moving from the right towards the left in the upper part of the frame.

The sequence was captured at 21:13 UTC on 10 April by G. Welles and D. Bamberger from the Northolt Branch Observatories, a British-German collaboration of astrophotographers with telescopes located in London, UK.

The jury appreciated the nice tracking sequence, the serendipitous coincidence that another satellite was caught in the observations, and the effort to identify the piece of space debris as the decommissioned geostationary satellite INSAT 2D.

The image was obtained using the observatory’s 0.25m Ritchey-Chretien telescope and a QHY42 CMOS camera.