Past Winners of the Europlanet Prize for Public Engagement 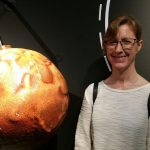 The 2019 Europlanet Prize for Public Engagement with Planetary Science has been awarded to Dr Amelia Ortiz-Gil in recognition of her pioneering work in developing educational and outreach resources for people with a range of physical and cognitive special needs.

Dr Ortiz-Gil has more than 15 years’ experience working in outreach at the University of Valencia (Spain), and has led numerous initiatives to promote accessibility in astronomy, including the development of tactile 3D planetary globes of the Moon, Mars and Venus. In 2013, she led the development of “A Touch of the Universe”, the first project to create a kit of astronomical resources accessible to the blind and visually impaired. To date, 30 kits have been distributed to educators and teachers in South America, Asia and Africa and the resources are also available under a Creative Commons license at: https://astrokit.uv.es/

Read the full press release and interview with Amelia Ortiz-Gil.

The 2018 Europlanet Prize for Public Engagement with Planetary Science has been awarded to Dr Amara Graps for her far-reaching work to inspire and promote space activities in the Baltic region within the scientific and industrial communities, in education and in wider society.

Dr Graps, who is based in Riga, Latvia, is the founder of the not-for-profit organisation, Baltics in Space, Lead Scientist at the University of Latvia and Senior Scientist at the Planetary Science Institute, based in Tucson, Arizona.The activities of Baltics in Space in support of the European Planetary Science Congress (EPSC) 2017, which took place in Riga from 17-22 September last year made a significant contribution to raising the profile of space in Latvia and the Baltics with audiences ranging from members of Parliament, business, the media, educators and schools. By compiling a catalogue of the skills and space capabilities in the region, as well as organising a showcase exhibit at EPSC, Baltics in Space facilitated opportunities for researchers and industry based in the Baltics to build new and competitive space collaborations with each other and with the international space community. An exhibition on the Solar System was visited by 600 local schoolchildren during EPSC and has since been visited by 10,000 children at the Zinoo Science Centre in Cesis. Read the full press release.

The 2017 Europlanet Prize for Public Engagement with Planetary Science has been awarded to the team behind the outstandingly successful exhibition, “Comets – The Rosetta Mission: Journey to the Origins of the Solar System”, at the Museum für Naturkunde, Berlin. Ulrich Köhler and Dr. Ekkehard Kührt, of the DLR Institute of Planetary Research, accepted the award on behalf of the exhibition’s curation team at EPSC 2017 in Riga.

The centrepiece of the exhibition is a thousandth-scale model of comet 67P/Churymov-Gerasimenko based on data from Rosetta’s OSIRIS camera system, surrounded by backlit photographs of the comet and mission highlights, selected spacecraft and instrument hardware and memorabilia. As well as historical and technical background on comets as important building blocks of the Solar System, the Rosetta mission and its scientific achievements to date, the exhibition includes film-clips highlighting the personal stories of the men and women that made Rosetta a reality and the deep emotions evoked by involvement in the mission. Press release on 2017 Europlanet Prize Announcement.

The 2016 Europlanet Prize for Public Engagement with Planetary Science was awarded to François Civet and Stéphane Le Mouélic of the CNRS/University of Nantes for their outstanding efforts in the development of immersive visualisation techniques for experiencing the Martian landscape.

They have developed a system that allows both groups and individuals to experience an immersive visit to Mars, including the Mars Cave Automatic Virtual Environment (CAVE) in which groups of up to 15 people can experience flights over Martian terrains using active 3D glasses, Virtual Reality headsets for exploring the surface of Mars using imagery from NASA’s spacecraft and rovers, and a free smart-phone app that can be used with a Cardboard headset. Press release on 2016 Europlanet Prize Announcement

The 2013 Europlanet Prize for Public Engagement with Planetary Science was awarded to Mr Jonathan (Jay) Tate for his outstanding efforts in furthering public understanding of Near-Earth Objects (NEOs) and the asteroid and comet impact hazard.

The Spaceguard Centre, founded by Tate in 2001, serves as a professional facility for astronomical research, a focus for public outreach and media activities relating to NEOs, as well as a unique educational centre. In the Autumn of 2012 the Spaceguard Centre was given formal recognition as the official UK National NEO Information Centre. Press release on 2013 Europlanet Prize Announcement

In addition to awarding the prize to Mr Tate, the Europlanet Prize Judging Panel also wished to pay tribute to the following nominees in 2013:

The judges granted a special mention to Emmanuel I. Kardasis for his work promoting collaborations between skilled amateurs and professional astronomers.

The 2012 Europlanet Prize for Public Engagement with Planetary Science was awarded to the Belgian scientist and writer, Dr Yaël Nazé.

Over the past 15 years, Dr Nazé has carried out a diverse outreach programme carefully tailored to audiences across the spectrum of society, including children, artists and elderly people. She has been particularly active in highlighting the contribution of women to planetary science and showing opportunities for girls looking at careers in astronomy. Following the publication in 2006 of her book ‘L’astronomie au feminin’, she has given many public lectures and was invited to attend several roundtable discussions and debates.

Dr Nazé, together with a colleague, pioneered a service for journalists giving daily summaries of space news translated into French. She designed a permanent exhibition on the Solar System for the pediatric ward of the Bruyères Hospital in Belgium. She has given more than 100 public talks worldwide on planetary subjects and is a prolific writer of popular science articles. Dr Nazé is also the award-winning author of seven books, including the ‘L’astronomie des anciens’, which won the Jean Rostand Prize for the best work of popular science in the French language in 2009. She has even written a cookbook inspired by the planets, which includes a recipe for Io pizza. Press release on 2012 Europlanet Prize Announcement

In addition to awarding the prize to Dr Nazé, the Europlanet Prize Judging Panel also wished to pay tribute to the following nominees in 2012:

A special mention was granted to the team behind the “Voyages Planétaires” exhibition, led by Stéphane Le Mouelic and Olivier Grasset from the University of Nantes.

The exhibition took place in parallel with the joint meeting of the European Planetary Science Congress and the American Astronomical Society’s Division of Planetary Science (EPSC-DPS) in 2011.  Voyages Planétaires was organised in the Great Hall of La Cité Internationale des Congrès Nantes from 3-9 October 2011. The exhibition was attended by 14 000 people, including 2 000 school students, and 1 500 scientists from the conference.

The winner of the 2011 Prize was the Austrian Space Forum for its community outreach programme to engage schools, teachers, the general public and the media.

The Austrian Space Forum is a national network for aerospace specialists and space enthusiasts. It is a volunteer organisation led by space professionals, focusing on space research including human-robotic Mars exploration. Since 1998, it has developed an outreach programme that targets schools, teachers, the general public and the media. The spectrum of its outreach activities ranges from simple classroom presentations to space exhibitions reaching 15 000 visitors.

The Austrian Space Forum’s research activities in the field of Mars exploration are complemented by the strong focus on educative and outreach aspects. The Forum has run schools competitions to design Mars missions and has developed a series of planet-themed outreach kits for audiences ranging from kindergarten to teenagers and adults. The kits include a set of space suits, a Martian landscape and a remote-controlled Mars rover, complete with cameras and a robotic arm. Public events include multimedia shows, often in partnership with science museums, and presences at festivals e.g. Ars Electronica Center Festival, Linz and the Innsbruck Autumn Fair.

The Austrian Space Forum produces regular press fact sheets on planetary science topics and events, as well as updates on its activities via its website, monthly Newsletter, Twitter, Facebook and YouTube. In April, the Austrian Space Forum mounted a field campaign to a Mars analogue site in Rio Tinto, Spain, to test the spacesuit simulator, Aouda.X. The campaign was part of PolAres, an interdisciplinary programme of the Austrian Space Forum, in cooperation with international partners, to develop strategies in preparation for future human-robotic exploration of the surface of Mars. Press release on 2011 Europlanet Prize Announcement

In addition to awarding the prize to the Austrian Space Forum, the Europlanet Prize Judging Panel also wished to pay tribute to the following nominees in 2011:

The inaugural Europlanet Prize for Public Engagement was awarded in 2010 to Jean Lilensten for his development and dissemination of the planeterella experiment.

For more than 10 years, Dr Lilensten has worked to share the magic of planetary aurorae with school children and members of the public across Europe, using his ‘planeterrella’ experiment. The planeterrella is inspired by experiments carried out at the turn of the last century by the Norwegian physicist, Kristian Birkeland, who first described how the Northern Lights were caused by the solar wind’s interaction with the Earth’s magnetic field. In a series of experiments, Birkeland aimed a beam of electrons at a magnetized sphere (terrella) inside a glass vacuum chamber and succeeded in recreating the ethereal glow of the aurora at the sphere’s poles.

In 1996, Dr Lilensten visited Terje Brundtland, who was restoring apparatus that Birkeland had used in 1913 for his largest experiment. Following the visit, Dr Lilensten built several terrellas with colleagues and students. From this series of experiments, he envisaged a portable, flexible version that could be used both as a scientific tool and for public engagement.

Dr Lilensten has trained colleagues and students in demonstrating the planeterrella and the Laboratoire de Planétologie de Grenoble hosts approximately two demonstrations per month. The experiment has been shown in exhibitions around France and featured on French and German television. Dr Lilensten has developed a website (http://planeterrella.obs.ujf-grenoble.fr) in French and English that describes the experiment, gives information about the aurora and shows images and movies of planeterrella in action. Observatories in Toulouse and Paris-Meudon now have their own copies of the planeterrella and another will go on display in the Palais de la Découverte in Paris later this year. Dr Lilensten is working with groups in the UK, Italy and Switzerland who propose to build their own versions. Press release on 2010 Europlanet Prize Announcement

In addition to awarding the prize to Dr Lilensten, the Europlanet Prize Judging Panel also wished to pay tribute to the following nominees in 2010:

Back to Europlanet Prize for Public Engagement main page.