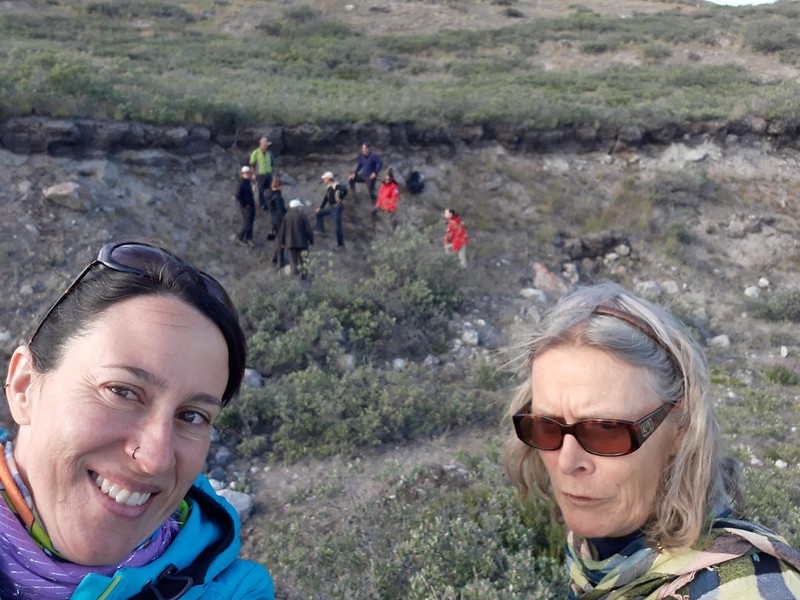 Glacial systems are interesting for studying habitability and the limits of life. They are extreme environments where microorganisms may survive prolonged exposure to sub-zero temperatures and background radiation over millions or billions of years. Glaciers and the surrounding icy “cryo” environments (permafrost, glacial lakes, or melting streams) can be used to study the development of microbial cryo-ecosystems and may have implications in the search for past or current life in icy worlds beyond the Earth.

In the Solar System, Jupiter’s moon Europa and Saturn’s moon Enceladus have been recognised as the icy worlds with highest likelihood to harbour life, largely because liquid water could be in contact with rocks. Both moons are believed to contain a global ocean of salty water under a rigid icy crust that would enable interaction between briny water and rocks, and allow the conditions for life to arise.

The permanent Greenland Ice Sheet (GrIS) is a potential analogue for such icy worlds, constituting an important historical record of microorganisms that can survive in extreme cold environments. Around the GrIS, different formations such as glacial lakes, permafrost, or further peat soils represent diverse stages of evolution of the GrIS and its thermal destabilisation.

We submitted a proposal to the second Transnational Access Call of Europlanet 2024 RI to visit the Kangerlussuaq Planetary Field Analogue Site in Greenland. In April 2021, we received the news that it had been successful, and our team’s visit took place from 19-29 July 2021.

Our project is an investigation of molecular and isotopic lipid biomarkers of microorganisms inhabiting different cryo-ecosystems at and around the GrIS. Through our results, we hope to obtain clues of a potential life development at an analogue site (ice sheet) of icy moons in our Solar System, and learn how ecosystems evolve (biological succession) when the ice cover retreats and gets exposed to the atmosphere (resulting in glacier-melting streams, bedrock-erosion sediments, lake sediments, glacial soils).

We searched for organics to study the molecular and isotopic composition of lipid biomarkers in environmental samples collected from different ecosystems in the Kangerlussuaq region on the west coast of Greenland, including: 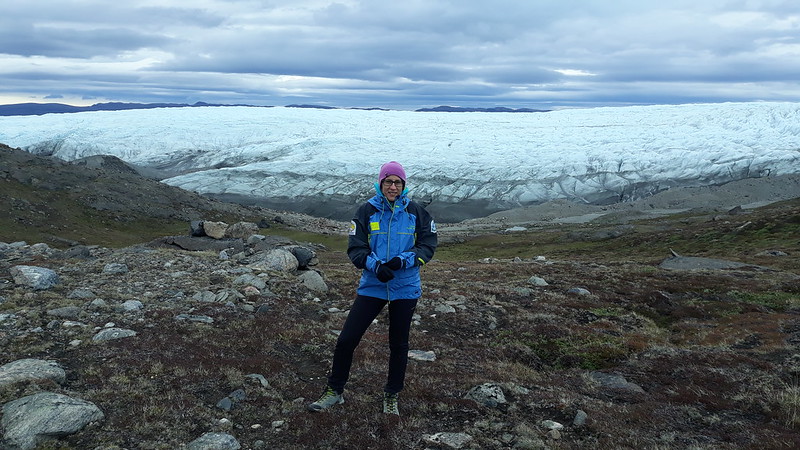 For the ice sheet study, we chose an ice sheet region in the Issunguata Sermia glacier system. There, we spotted four sites for sampling ice cores:

In the four sites, ice cores were retrieved down to 50-80 cm depth with a manual ice driller and, when the driller didn’t go deep enough, we dug a surface of about 35×35 cm2 with a geologist’s hammer to collect as much ice as possible down to the deepest depth reached by the drill. 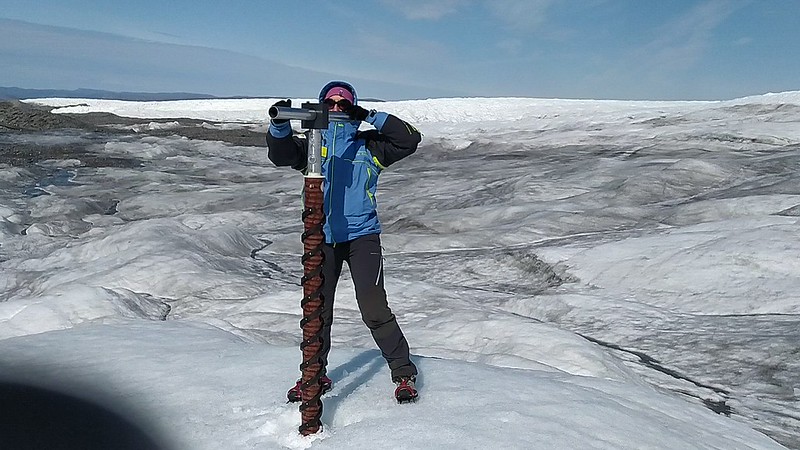 Together with the ice drills, we also collected additional samples from:

The four ice drills were melted and, together with the melt water sample, were filtrated through 0.7 μm pore-size glass fibre filters, to recover the particulate matter and look for total organic carbon and lipid biomarkers. 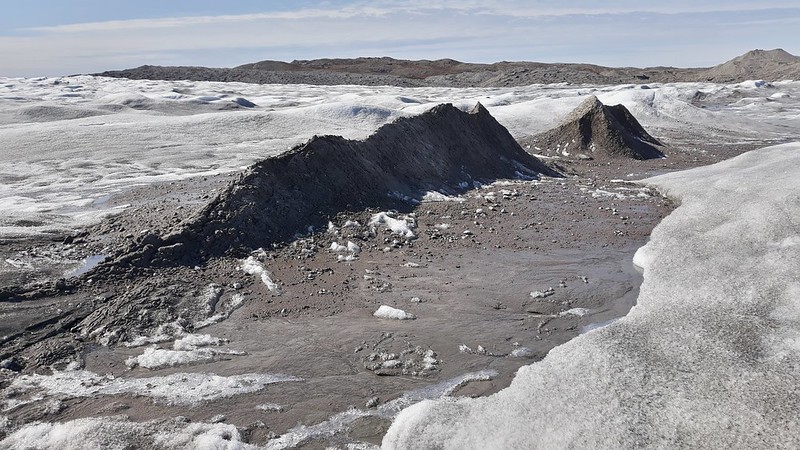 2) Nearby glacier-influenced ecosystems in and around glacial lakes 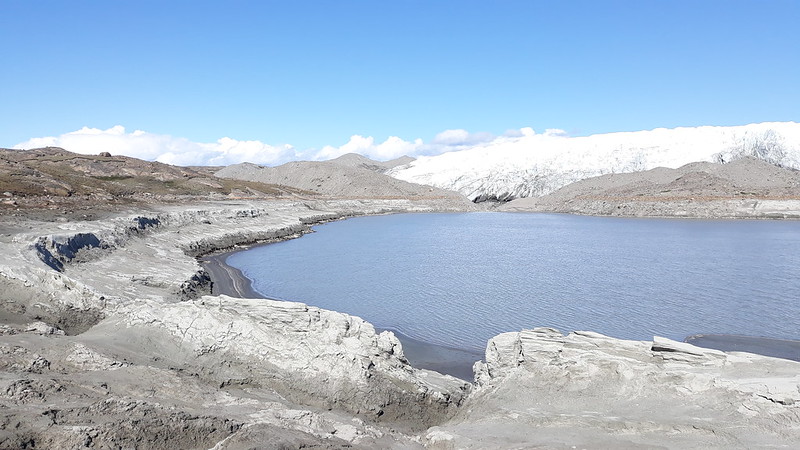 For the study of the glacial lakes study, we chose two different systems:

A glacial lake (GL1) about 200 m apart from an edge of the glacier Issunguata Sermia.

In this lake, we sampled a surface sediment from near the shore, together with sediments from an exposed “terrace” near the shore, where material at ground level represented the oldest and that at top of the terrace the youngest. The terrace was assumed to be composed of sediments accumulated in the past when the lake had a higher water level compared to today.

The lake system is composed of four interconnected glacial lakes, where the first lake (GL2; closest to the glacier edge) receives water from the melting glacier and feeds the second lake (GL3), which in turns feeds the third (GL4), and this the fourth (GL5).

Here, we collected water (for chemical analysis) and surface sediments (for lipid biomarkers analysis) from the four lakes, and a 25 cm-deep sediment core only from the fourth lake (i.e. furthest from the glacier edge).

We aimed to assess the organic-composition differences between glacial and non-glacial lakes, so we also sampled a number of non-glacial lakes fed by meteoric (rain and surface runoff) water:

In the three lakes, we sampled water (for chemistry analysis) and surface sediments near the shore. Then, for the small lake (L6) and Salt Lake (SL), we collected a sediment core of 14 and 34 cm depth, respectively. At the Salt Lake basin, we also collected samples from a terrace in the shore, corresponding to past sediment/peat material piling up at the lake shore. 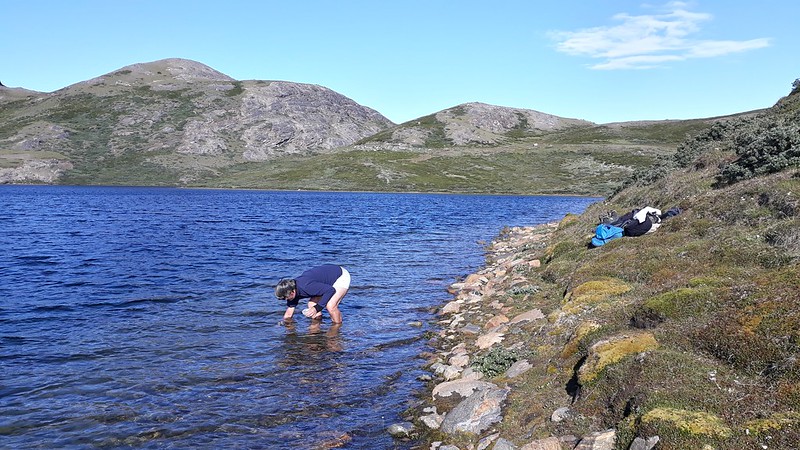 Finally, we wanted to learn about the soil development upon glacier retreatment, so we collected soil samples from a transect that included:

In order to get a glimpse of the fresh isotopic signatures from the vegetation contributing to the soil lipidic fingerprint, we also collected samples from the most representative vegetal specimens found in the studied area: sphagnum; grass; rounded-leave creeping plant with white flowers; orange, black, and pale-yellow lichens; and submerged and emergent macrophytes (from GL1). Most vegetal samples were collected from the surroundings of glacial lakes GL1 and GL4.

Following our return from Greenland, we are now starting on the analysis of samples and aim to publish our findings in a paper.

All photos from the trip 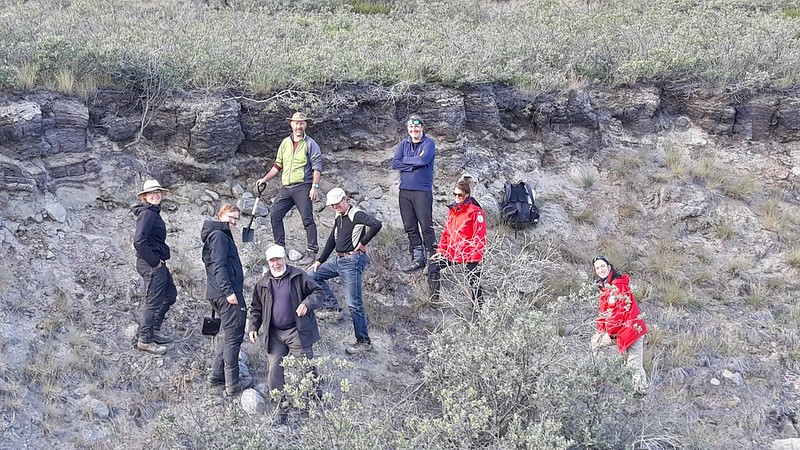 The BioGreen Transnational Access visit was supported by Europlanet 2024 Research Infrastrucutre and received funding from the European Union’s Horizon 2020 research and innovation programme under grant agreement No 871149.