Observing the DART impact with DART – OPTiK Campaign in Kenya

In this guest post, Megan Leishman reports on the activities of the DART – OPTiK team in Kenya, which have been supported through the Europlanet Coordination of Ground-based Observations Networking Activity and Ambassadors’ Programme.

Hello! We are the DART – OPTiK team, a collaboration of researchers from the University of Edinburgh, STFC UKRI, Technical University of Kenya and the Turkana Basin Institute. We will be working at the TBI base in Ileret for the next couple of months to set up a portable telescope which will then take observations of the equatorial sky for many nights to come, including the impact of NASA’s DART mission with asteroid Dimorphos in late September.

NASA’s DART Mission (Double Asteroid Redirection Test) is the first of its kind, a planetary defence mission aimed at testing asteroid deflection through impact. The test will be carried out on a binary asteroid system, which has a big asteroid (Didymos 780m) with a smaller moon (Dimorphos) orbiting it. These will imitate the Sun and a smaller asteroid, on course to collide with the Earth. The spacecraft, which NASA launched at the end of last year, will collide with the moon at the end of September this year. Astronomers will then monitor the orbit of the moon to measure how effective this ‘kinetic impactor’ experiment was.

None of the large observatories in the Americas will be able to see the actual impact until 4 hours later due to it being daytime when the collision happens. This is where our portable telescope comes in!

We will be able to observe the impact as it happens and be able to see anything that comes from the actual collision such as dust. After the impact, the telescope will also be able to monitor the orbit of the moon using its lightcurve.

The telescope will also be used to do astronomical tests to discern whether the site is suitable for more permanent observatory to be built there in the future. This is the first time these kinds of images will have been taken in Kenya, and along with the help of the Kenya Optical Telescope Initiative (KOTI), we hope to be able to continue observations in the country and help to increase the astronomy that can be done here. Working with the Technical University of Kenya and the Kenya Space Agency, we will strengthen capacity for local astronomy and facilitate new research in the region.

Whilst we are in Ileret, we will also be working with the local community to run school workshops and an open night at the base. We hope to learn from the local cultures about how astronomy has influenced them and to share cultural parts from our end, and learn from them about their culture. 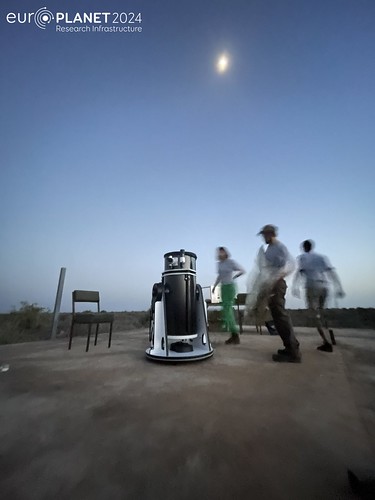