SuperLuna! Challenge: And the Winner is…

The ‘supermoon’ on 26th May was the closest Full Moon of this year. To mark the occasion, Edu INAF and Europlanet 2024 RI challenged the public to observe and portray our satellite. Participants in the SuperLuna Challenge were given free range to use their creativity to represent the Moon in its different phases through photos, videos, drawings.

Federica Duras of INAF says, “In fact, the over 40 works submitted, together with those collected through social media, give a multifaceted portrait of the Moon, many of which were shown during the live event in May of “Il cielo in salotto”. We’ve seen the Moon peeping shyly out from the dark foliage of the trees of Wales, soaring scarlet above the towers of a medieval castle in the Roman skies, or sleeping under the wing of Venus in a colorful Virginia sunset. Thank you to all participants for having been able to respond to such a challenging test combining science and art and encouraged us to keep our noses up, to admire, once again, the many faces of the Queen of the Night.”

The winning image comes from Vicenza, Italy, from the balcony of Roberto Vaccaro’s home.

The work of the students of the school Fabio Filzi (Laives, Italy) who, with the guidance of their teachers, took a beautiful photo emphasising the lunar seas and craters.

The stunning and extremely realistic Moon in black and white pencil sketch by Mary McIntyre:

This drawing by William is made up in red, yellow and bright as the Sun. (SuperBright Moon. Credit: William Rizzi). 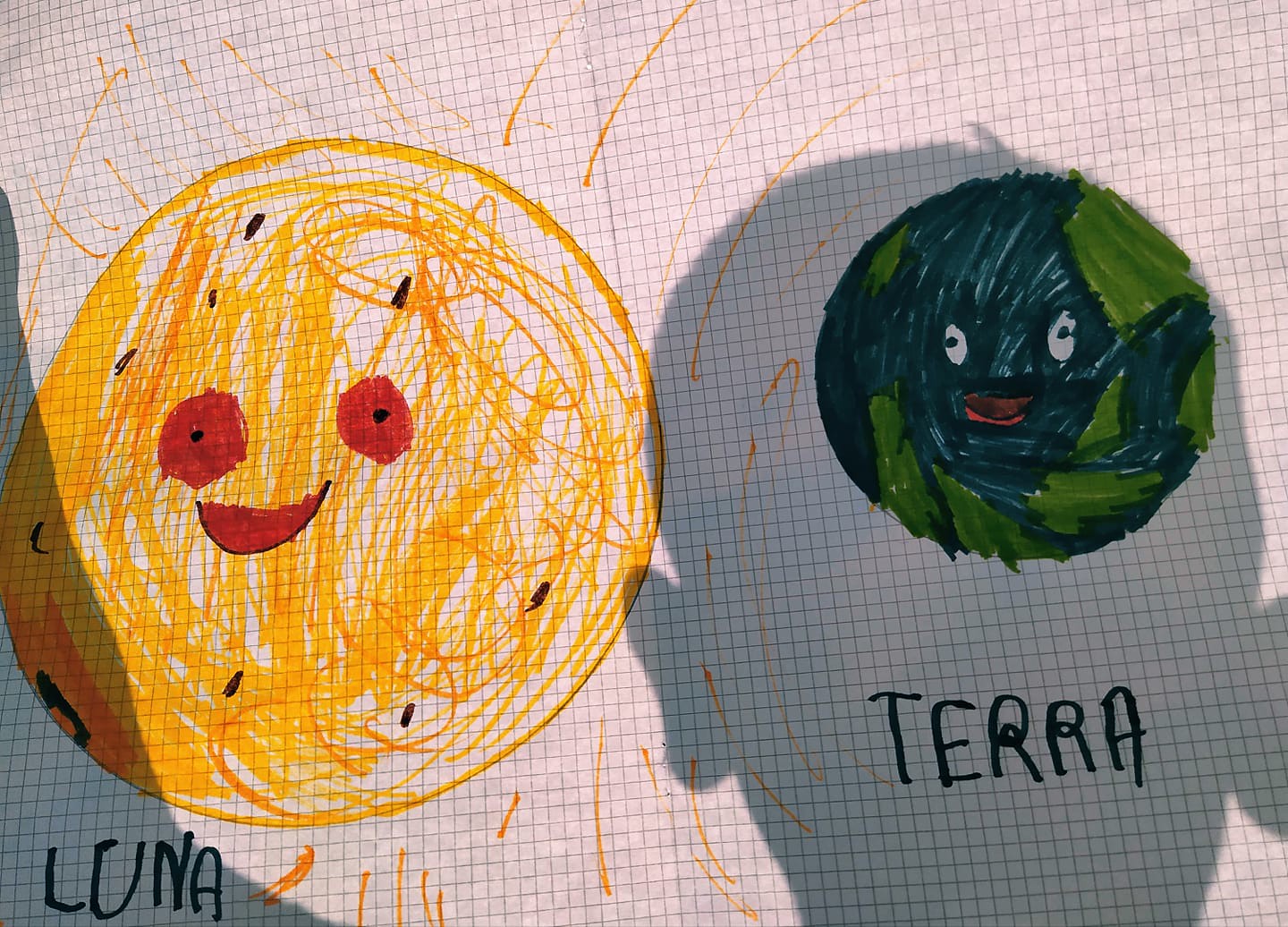 The Supermoon drawn by Elisa and her little brother Francesco has a Supersister with whom to play at piercing the darkness. (Super Luna con mantello e Superluna in compagnia. Credit: Elisa e Francesco Oliverio).

Luca Nardi Interviewed Roberto Vaccaro about how he achieved his winning photo:

Roberto Vaccaro, congratulations on your amazing photograph of the Moon. Where did you take it from?

Thank you very much, the news of the prize was really a surprise! I took this photo from the terrace of my house: fortunately in order to shoot the Moon, especially when it is so bright, there is no need to move to isolated locations in search of dark skies.

And what instruments did you use?

I used a Newtonian telescope with 130mm aperture and 900mm focal length. I then connected a direct-focus mirrorless camera, so that the telescope acted as a lens for the camera itself. For the image I used the high-resolution method (which is used to shoot celestial bodies such as the Moon and planets) creating a video in 4K, from which I then extracted the individual frames. Next, I overlapped them with a processing program to eliminate noise and the distortions due to atmospheric turbulence: so I got the final image!

Was it more or less difficult to take a picture of the Supermoon compared to a normal Full Moon?

It is not more difficult, because the Full Moon is always extremely bright. However, for this reason a little care is needed because there is the risk of overexposing the photo (making it too bright), thus reducing the contrast effect of the lunar seas (which are the darkest regions of the Moon) and the details of the craters.

How was your passion for astrophotography born?

I have always been fascinated by astronomy and observations with a telescope, but my passion for astrophotography was born because I wanted to see celestial objects (such as nebulae and galaxies) that cannot be seen with a simple observation with the naked eye since they are too dim. They can reveal all their beauty thanks to a telescope, a camera and sufficiently long exposure time.