Mercury is the innermost terrestrial planet. Its formation and evolution are important for understanding the formation of our Solar System. On 20th October 2018, ESA/JAXA’s BepiColombo mission blasted off on a seven year journey to Mercury. The spacecraft’s various instruments include a thermal/mid-infrared imaging spectrometer, the Mercury Radiometer and Thermal Imaging Spectrometer (MERTIS), that will allow new and unique insights into the evolution of one of the least explored terrestrial planets.

The NASA MESSENGER mission, which orbited Mercury between 2011 and 2014, discovered that despite forming so close to the Sun, Mercury is richer in “volatiles” (chemicals that evaporate easily) than previously expected. Theory suggests that sulphur in the interior of Mercury can be brought to the surface in the form of sulphides through volcanic activity as slag deposits in Mercury hollows and pyroclastic deposits. To verify this, researchers need to be able to accurately map the mineraology of Mercury’s surface and compare observations to a comprehensive spectral library of sulphide minerals measured under hot Mercury surface conditions — something that has not been available until recently.

Over the past decade, the Planetary Spectroscopy Laboratory (PSL) at German Aerospace Center (DLR) Berlin has obtained thermal emissivity measurements of analogue materials under controlled and simulated surface conditions of Mercury from 100° to 500°C under vacuum conditions. The resulting spectral library will support measurements from MERTIS, once BepiColombo arrives at Mercury. The spectral library includes measurements from a range of minerals, including major silicates such as olivine, and labradorite, rocks like tektite, and synthetic powdered sulphides such as magnesium sulphide, iron sulphide, titanium sulphide etc.

In this talk, Indhu will explain how she and colleagues at have been using laboratory measurements and machine learning techniques at the PSL to understand the surface mineralogy of Mercury and prepare for analysis of data collected by MERTIS during BepiColombo’s mission. 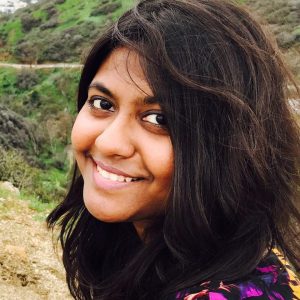 Indhu Varatharajan is from a southern state of India called Tamil Nadu. She did a bachelors in Geoinformatics Engineering at the College of Engineering Guindy (CEG) in the capital city, Chennai. She travelled to London for her Masters in Planetary Science at University College London (UCL), funded by a Commonwealth fellowship.

Her background in Geoinformatics and major in Planetary Science paved the way for her to work on an exciting opportunity (via a DLR/DAAD funded project) to evaluate new spectral analysis techniques to study the hot surface of Mercury with the MERTIS (MErcury Radiometer and Thermal infrared Imaging Spectrometer) instrument onboard ESA/JAXA’s BepiColombo mission. MERTIS will be the first instrument to image the emissivity of Mercury surface in a hyperspectral mode at mid-infrared (MIR) spectral range. MERTIS will map the Mercury at the spatial resolution of 500m/pixel and spectral resolution of 200nm.

As BepiColombo will reach Mercury orbit in 2025, Indhu’s PhD work has focused on a variety of aspects of MERTIS data science such as:

Indhu is currently pursuing her second year PhD at German Aerospace Center (DLR), Berlin. She is also the Chair of Europlanet Early Career (EPEC) Committee, which through the EPEC network aims to build a stronger community of early career researchers and future leaders of planetary exploration within Europe.